8 photos
Tanzania is a wonderfully diverse country in every way. From the nearly 80 unique languages to the national parks to the tropical beaches, this east African country would take a lifetime to capture with a camera yet I was limited to 8 images for the Bohemia Gallery and this is the result.

The image selection is printed on canvas, a common material in Tanzania, and is exaggerated in its diversity to show the range of scenes within the country.

With the three culture/people photos I tried to show the transition from traditional Maasai hearders to the youth in the city jumping into the water. However, in the end, the the image "Culture Shock" was not selected. Yet I still include it here because it is a favorite of mine as it shows an Italian bikini clad tourist flirting with a Maasai guard as Muslim fisherman return to the shore. This is a major issue in Zanzibar and on June 9th there were even small riots on the tourist island that targeted western hang outs. I obviously don't support this extreme view yet the bikinis in a conservative culture are only fueling the fire.

I've spent about 15 years of my life in Tanzania and feel a sense of joy and wonder when I walk around with my camera. Most of this website is about Tanzania so feel free to explore and let me know what you think. Asante sana for visiting. - Peter / Poa
© Peter Stanley 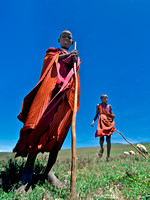